Risk-off as the Fed continues to aggressively tighten rates

Another hawkish hike from the Fed will leave a continued legacy of negative risk appetite. This will drive ongoing USD strength and keep equity markets under selling pressure. 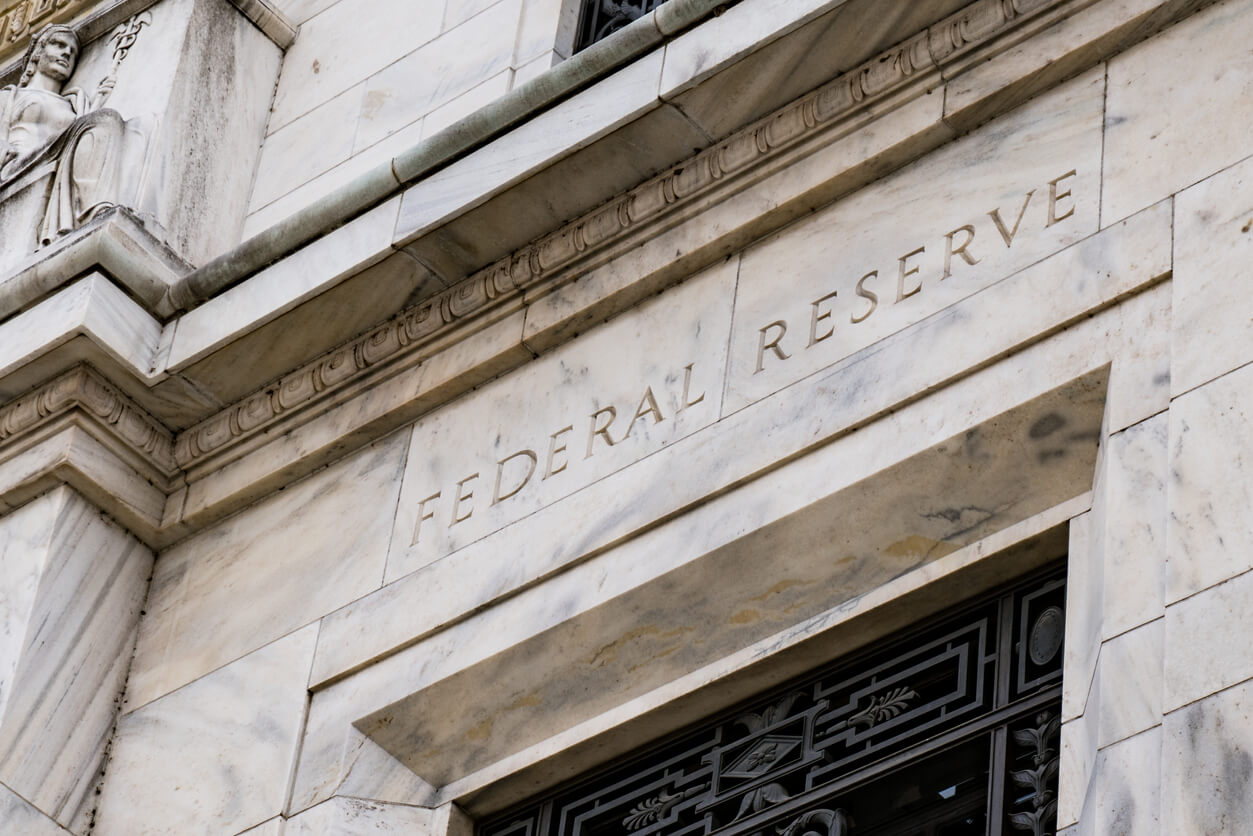 The Federal Reserve (Fed) has hiked the Fed Funds rate by 75 basis points to a range of 3.00% / 3.25%. This was in line with consensus estimates. However, other aspects of the decision have meant that this was seen as a “hawkish hike”. This will have a lasting impact on risk appetite. It should help to sustain the long-term positive USD outlook and keep equity markets under negative pressure.

The Fed has hiked by another 75 basis points. This was in line with the market expectation. There had previously been some potential for a 100 basis points hike, but in the wake of disappointing industrial production and retail sales data, this had been largely dismissed.

The Fed is now back to being around the highest interest rates of the major central banks.

There were no surprises in the FOMC statement. It was a statement with some of the fewest changes for a while. As we can see below, this was pretty much a cut-and-paste job from the FOMC. 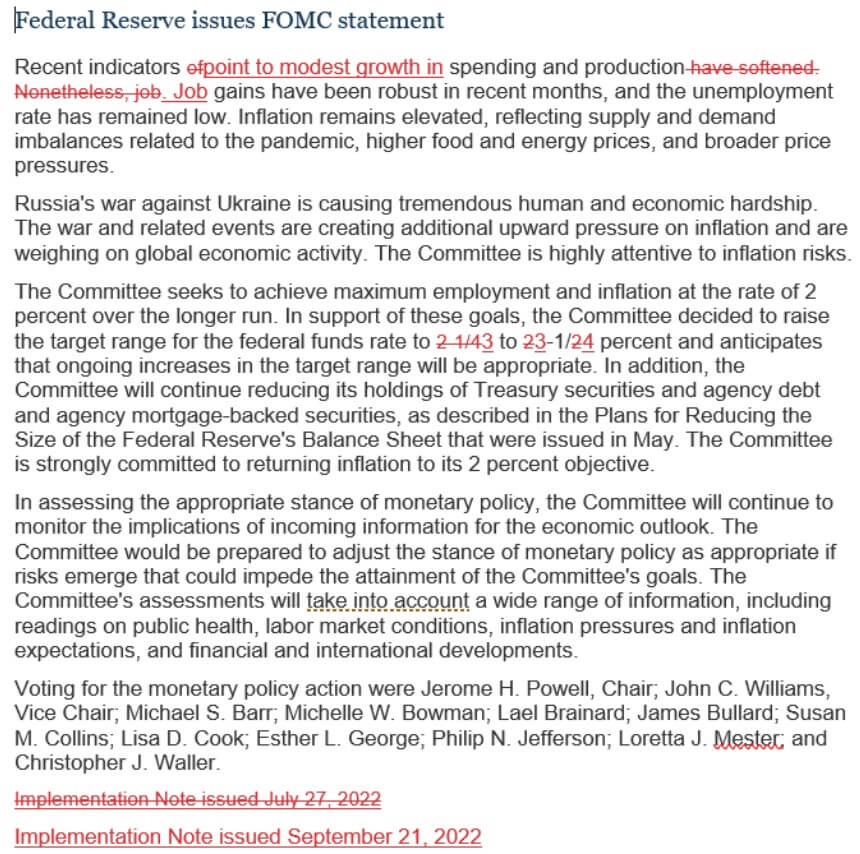 The action came from the Fed’s projections

So where did the feel of a “hawkish hike” come from? The answer lies with the dot plots of interest rate projections.

Four times a year the FOMC members give their projections of where they see interest rates headed. Each member has a dot and the collation provides us with the dot plots. This time, the dots were increased significantly. Furthermore, they were increased more than where money markets had been anticipating. 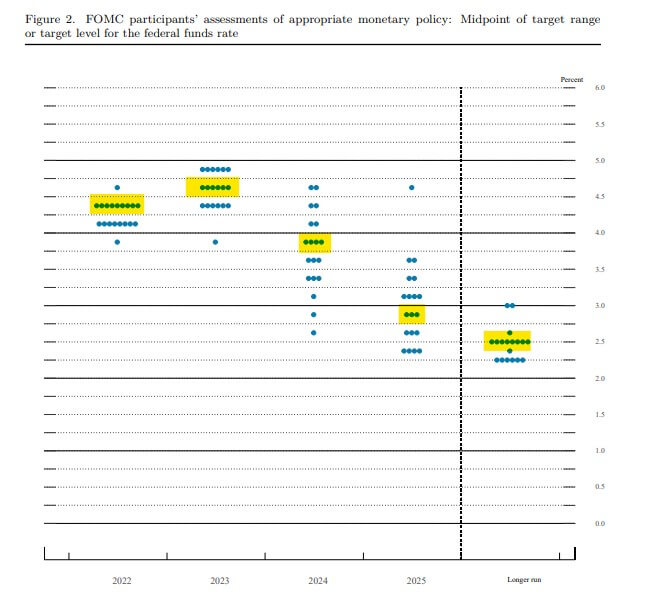 What is then interesting is that into 2024 cuts are likely. However, the FOMC is extremely divided over how many cuts we will see.

A quick look at the economic projections also reveals why markets will be spooked by this: 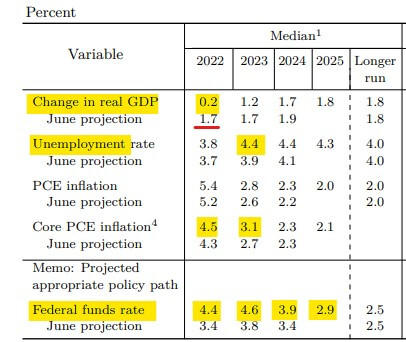 The lasting impact of this will be negative for economic prospects

The US economy has been relatively resilient to the current slowdown in global growth. However, the Fed is downgrading the economic prospects just as it looks to be more aggressive.

There has been a decisive impact on US bond markets. The spread between short and longer-duration Treasury bond yields has fallen even deeper into the negative. 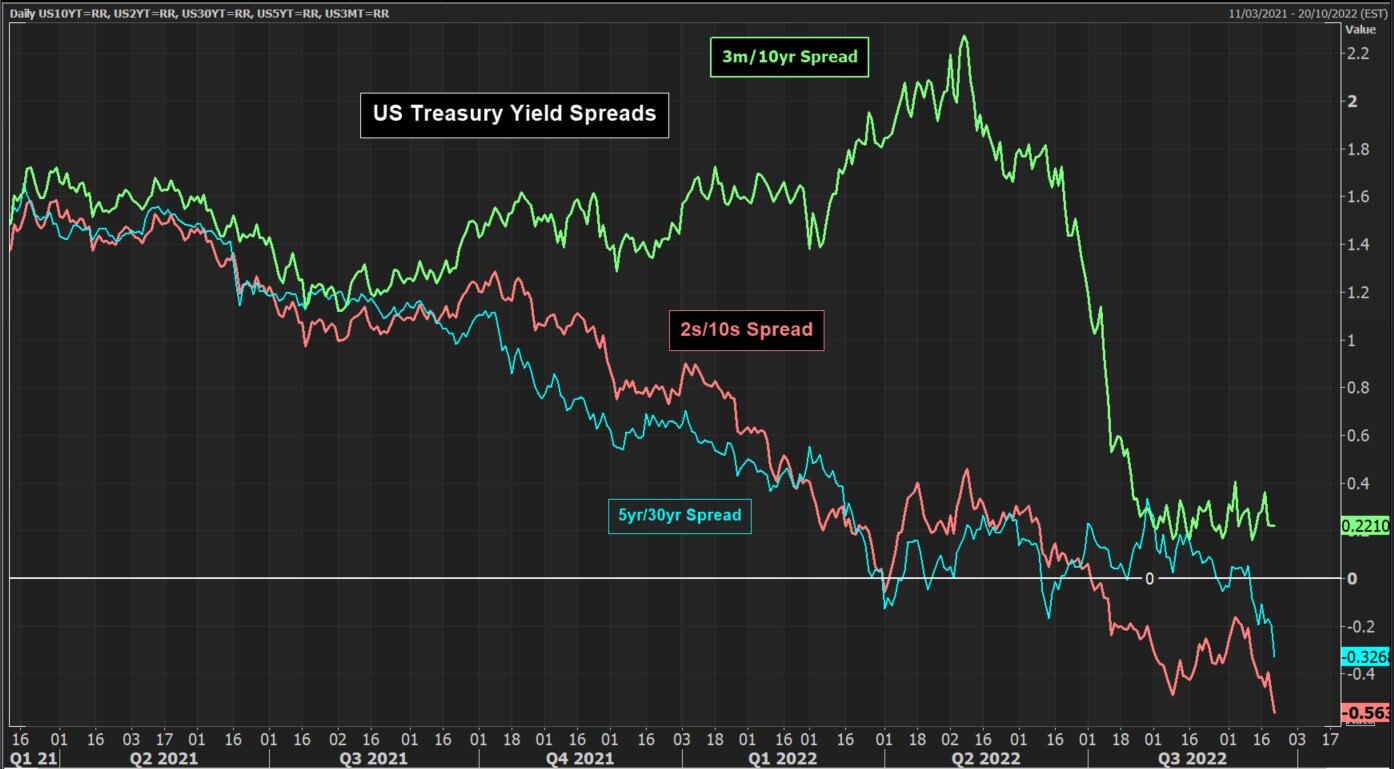 Whilst short-term yields (investors typically use the 2-year yield) reflect the Fed’s monetary policy, longer-duration bonds (such as the 10-year or 30-year) reflect the outlook for economic growth and inflation.

Spreads accelerating deeper into negative territory (reflecting an inversion of the yield curve) is the bond markets telling us to prepare for a recession. The Fed is aggressively tightening interest rates as economic prospects are deteriorating. This is not good for broad risk appetite.

Negative risk appetite leaves the USD as a clear outperformer. This has been the case for several months and is unlikely to change any time soon. There might be some near-term unwinding moves against the USD (such as seen with the Japanese Government intervention to support JPY). However, these moves are still likely to be short-lived.

We remain USD positive and see any weakness in the USD as a chance to buy. 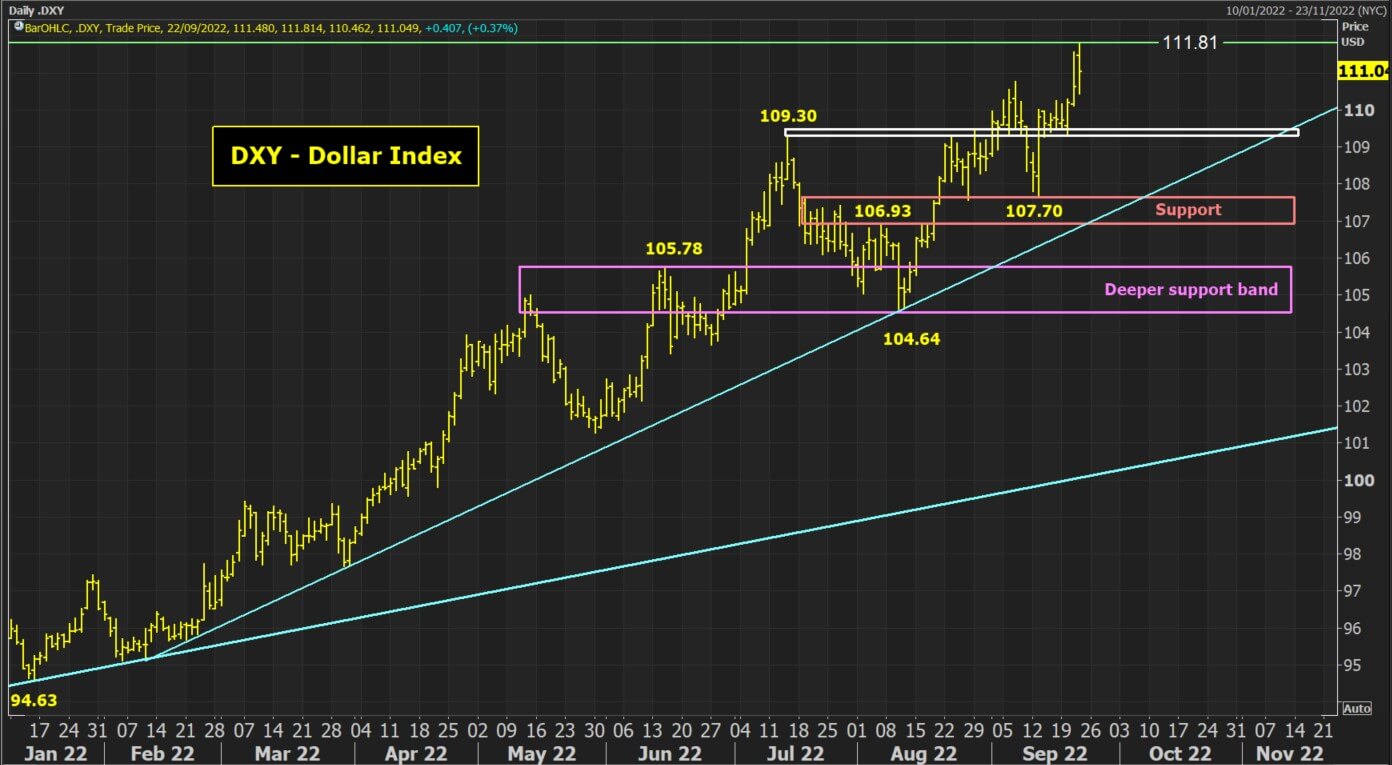 Furthermore, this will mean that the negative outlook on indices will remain in play. Wall Street markets have broken below important pivot range support this week. This has opened the June lows, which we expect to be retested in due course. We see near-term strength on S&P 500 futures towards the resistance band 3880/3950 as a change to sell for a test of 3640. 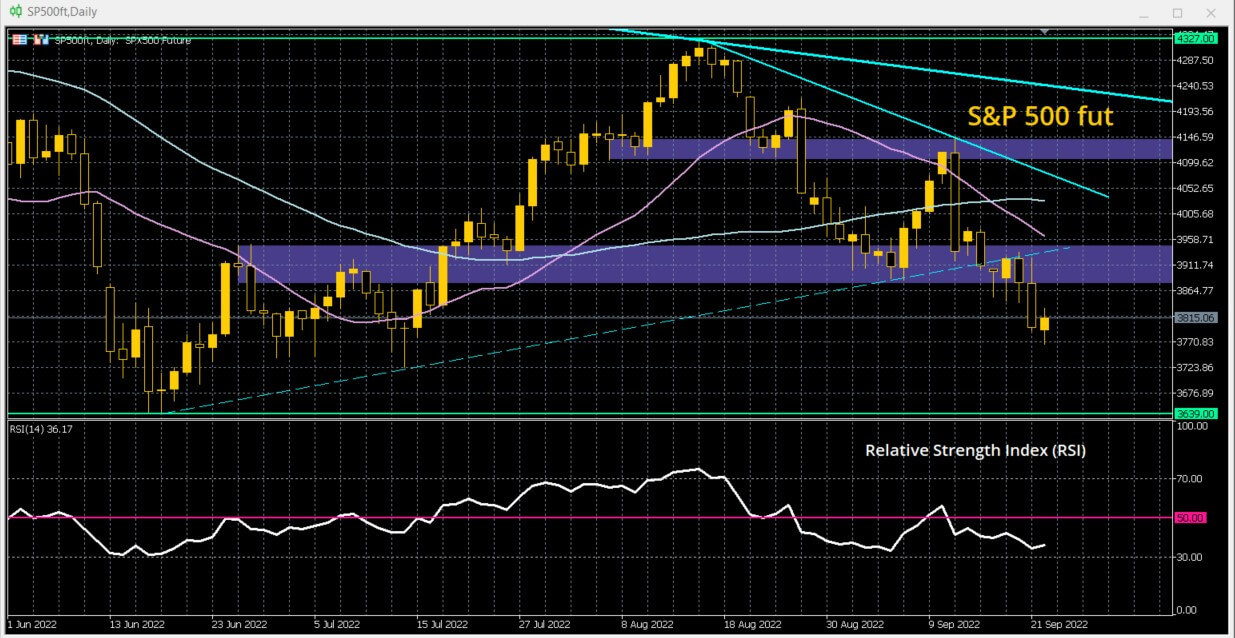 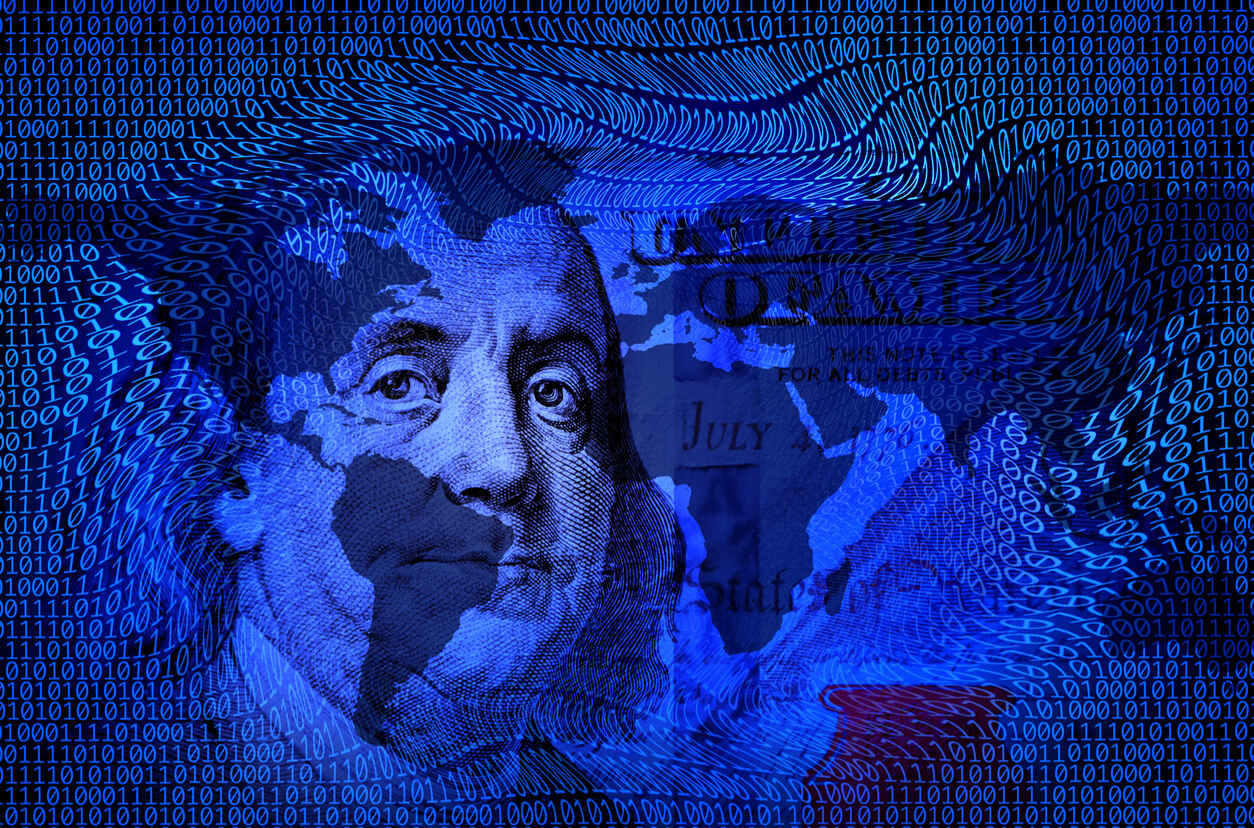 Espresso Morning Call: Trends resume, USD strong, risk-off
Markets have navigated through a swathe of central banks this week. However, existing trends seem to be resuming, with the USD strengthening and a negative bias to risk appetite.
FIND OUT MORE 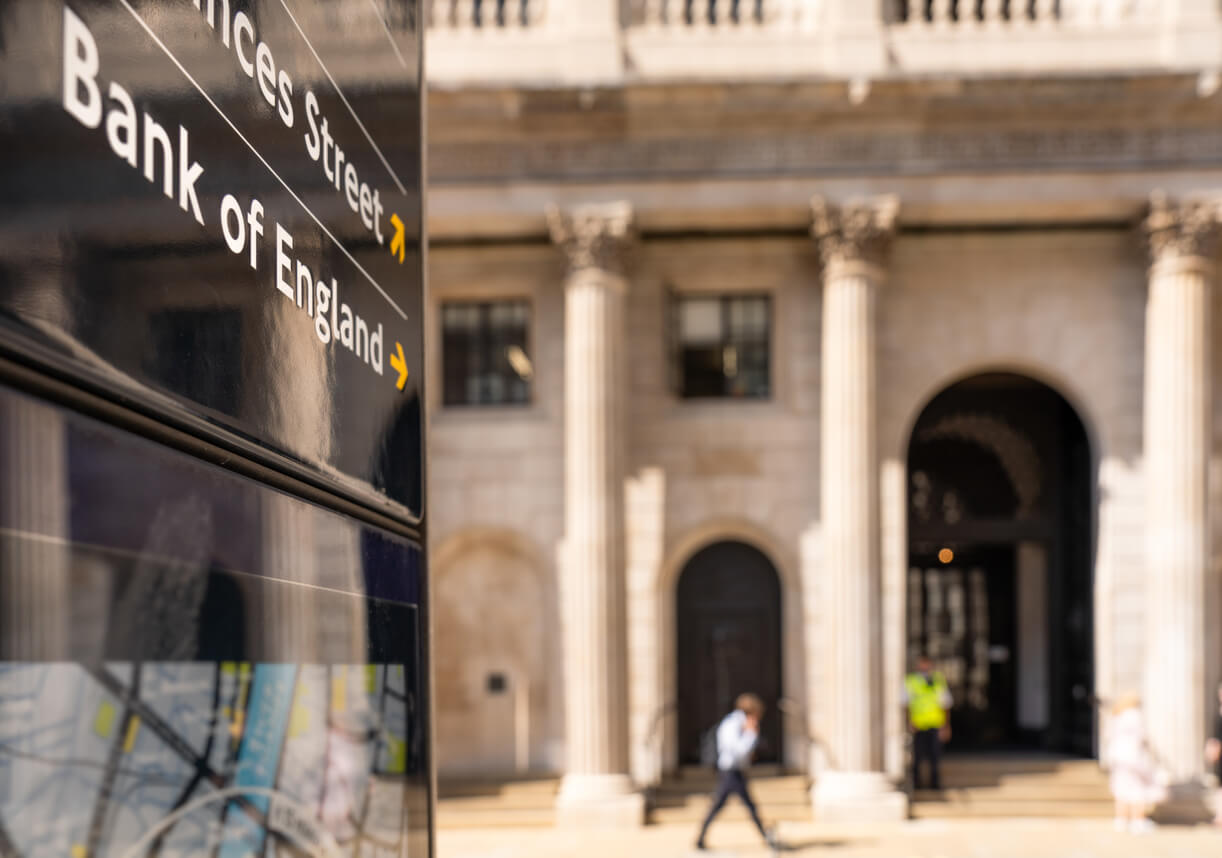 Bank of England hikes by 50 basis points, as expected
No surprises from the Bank of England with a 50bps rate hike. However, the move seems to have come as a slight disappointment as GBP falls back.
FIND OUT MORE

Risk-off as the Fed continues to aggressively tighten rates
Another hawkish hike from the Fed will leave a continued legacy of negative risk appetite. This will drive ongoing USD strength and keep equity markets under selling pressure.
FIND OUT MORE
IX INTEL - DISCOVER MORE