Timing the next move to play the USD correction

The USD decline in November has broken the trend of outperformance. We now see a corrective outlook for the USD and this is key across major forex pairs.

The US dollar (USD) has seen a sizeable pullback in recent weeks. This move has come as markets have been increasingly priced for peak hawkishness from the Federal Reserve. US Treasury yields have fallen away and weighed on the USD. This is having significant implications for the outlook of major forex pairs. However, markets will often see kickbacks and retracements to bigger trending moves. It is all a question of timing.

Faltering yields weigh on the USD

The USD has been supported by the aggressive monetary policy tightening by the Federal Reserve throughout 2022. However, in recent weeks, inflation has shown signs of peaking and economic activity indicators have been faltering. The cracks have started to show in the unanimity on the FOMC. The doves are starting to find a voice, and after hiking for 75bps in the past four meetings, the pricing for the FOMC in December is for a less aggressive 50bps hike.

The current (top end) of the Fed Funds rate range is 4.00%. Interest rate futures are pricing a terminal rate of 5%. Even the more hawkish-leaning FOMC members are arguing for rates to hit a high of around 5%. The most aggressive phase of the Fed tightening is seemingly over.

Bond yields are reacting and have been moving lower throughout November. The US 2 Year Treasury yield is considered to be indicative of interest rates. The 2yr yield has broken an uptrend and technical analysts will be watching now for a potential top pattern. A move below 4.265% would complete a head and shoulders top. 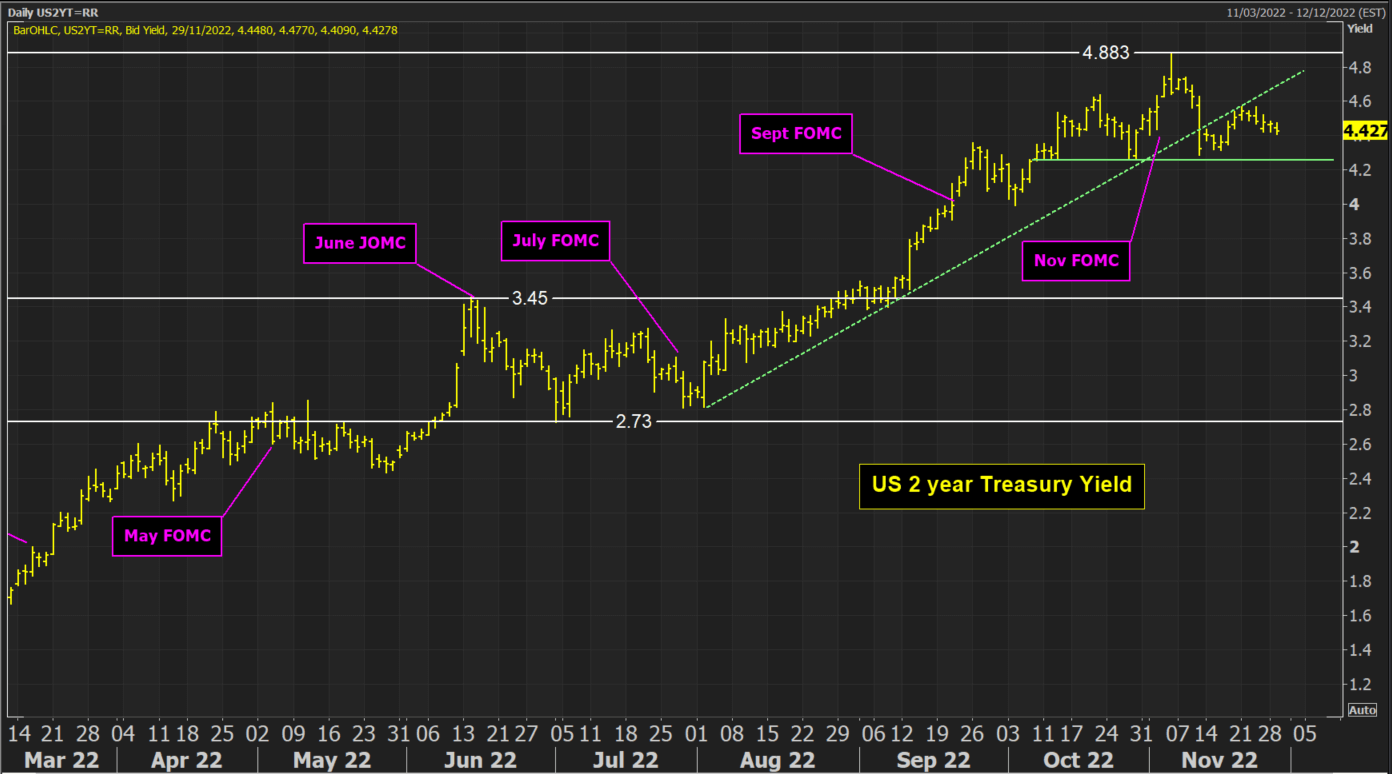 This implies that even though the Fed may have another 1% to add to the Fed Funds rate, markets view the outlook of US interest rates moving forward as starting to fall. We look at the US 10-year “real” yield (interest rates minus inflation) as having a strong positive correlation with the USD. Real yields are starting to fall over. This is already weighing on the USD. As can be seen below, the correlation is especially strong right now. 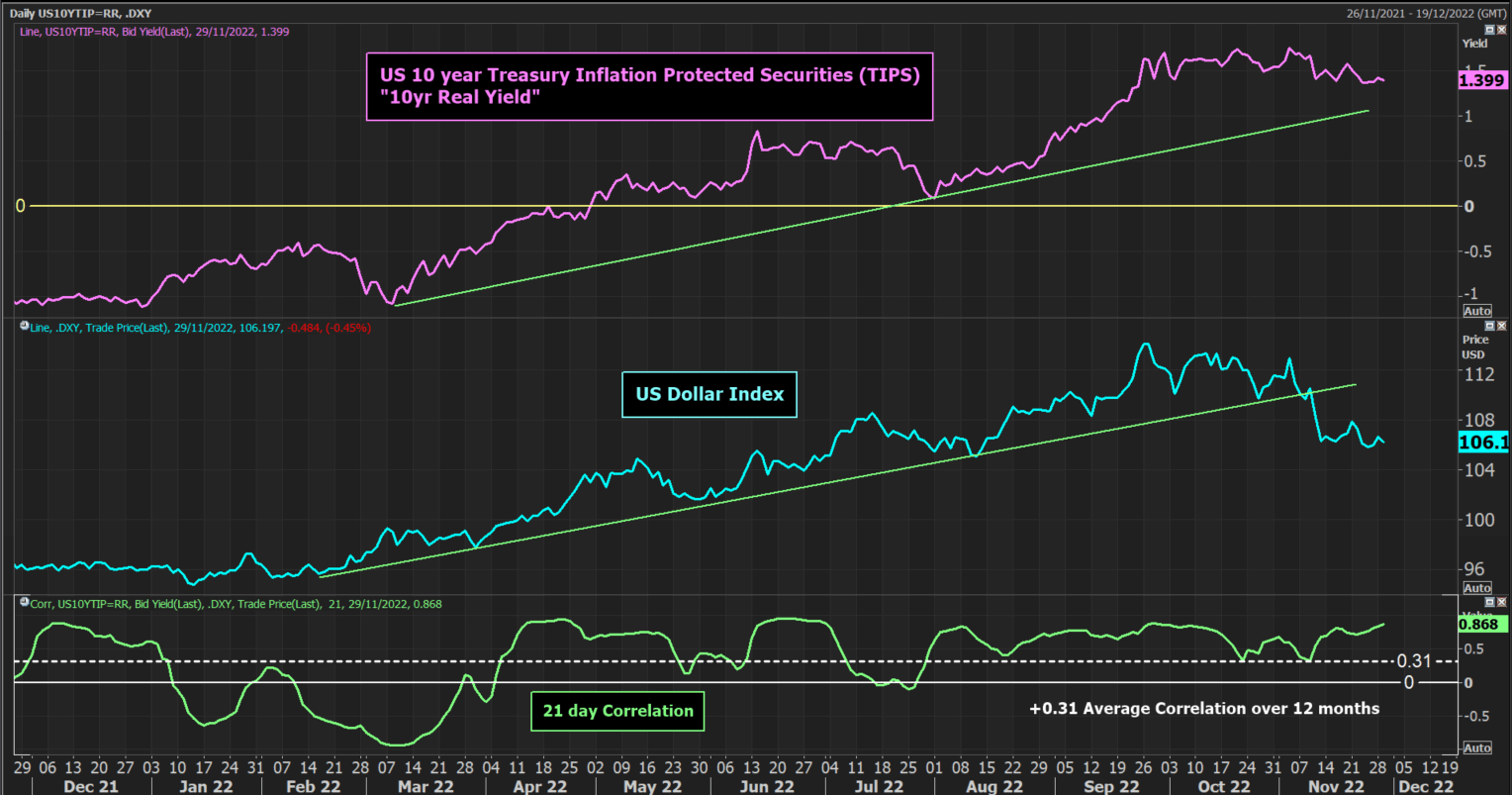 Looking at the chart of the Dollar Index (a basket of currencies priced against the USD) we can see that there has been a huge correction that has been forming throughout November.

As we can see, a big uptrend since February has been decisively broken. A succession of lower highs has been forming which suggests a growing corrective phase for the USD now. Support around 104.64/105.34 is being tested. A move below 104.64 would be the next big breakdown for the USD.

The big break below 109.30 was a crucial moment. This left 109.30/110.05 as key overhead supply resistance. The near-term technical rally just over a week ago faltered at 108.00. We see near-term rebounds (such as yesterday) as a chance to sell.

The outlook for major forex pairs

Onto the major forex pairs, there have been some mixed signals in the past week or so, but near-term USD strength is increasingly being sold into.

On EUR/USD the chart is almost a mirror image of the Dollar Index chart. The crucial breakout above 1.01/1.02 just over two weeks ago was similar to the breakdown on the Dollar Index below 109.30. It means that 1.0100/1.0200 becomes a crucial breakout support and any near-term unwinding moves would be looking to build support around or above there (just like the 1.0220 reaction low last week).

The RSI momentum is strongly positively configured and weakness is a chance to buy. A close in the 1.05s would signal the next leg higher in the recovery. This would open 1.0615 and possibly moves towards the May high of 1.0780. 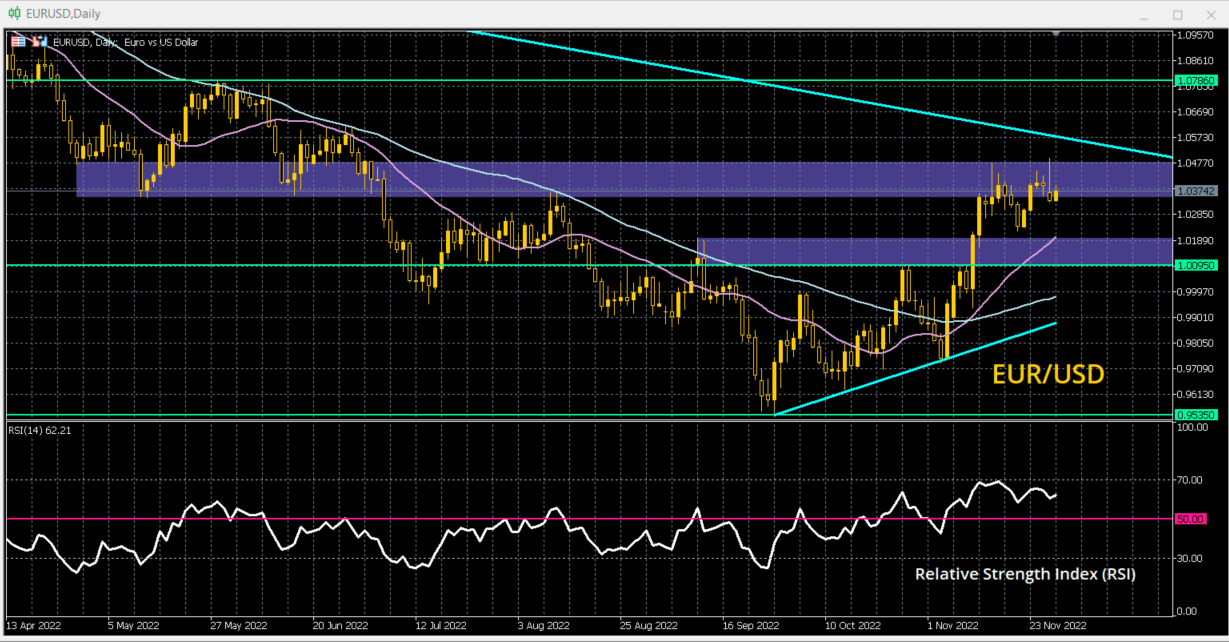 On GBP/USD an expanding uptrend channel has formed since the breakout above 1.1500/1.1645 resistance. This old resistance is now an important basis of support for the run higher. However, a decisive close above 1.2150 would open a test of the August high at 1.2290. 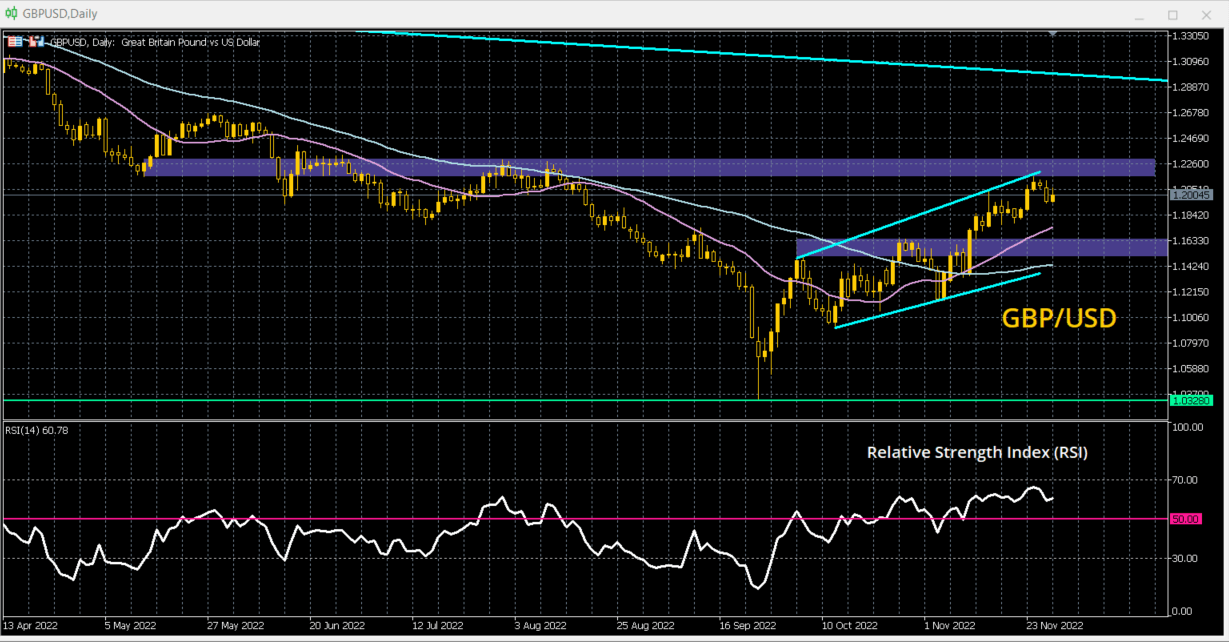 AUD/USD has been making good progress in recovery too, consistently breaking the primary downtrend. Holding the breakout above 0.6550 is key to the continued recovery. Momentum is strong with the RSI consistently above 50 and this reflects a strategy of buying into supported weakness. A decisive close into the 0.68s would open the September high of 0.6915. 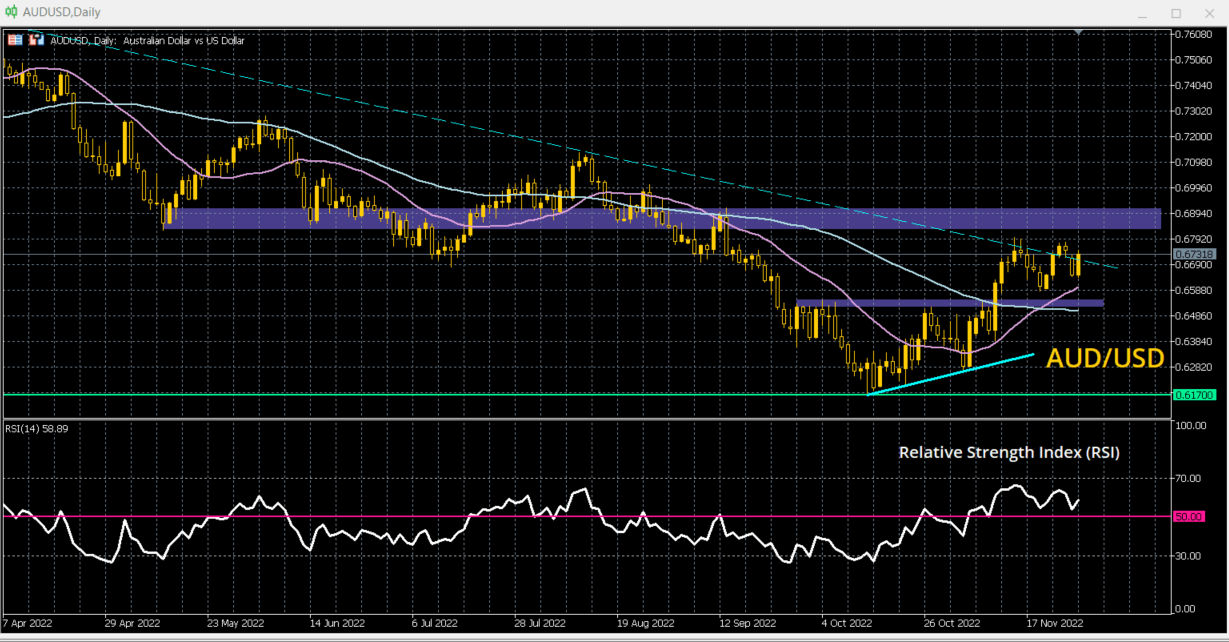 Finally, we have a big correction in USD/JPY. Given the huge run higher in USD/JPY and the underperformance of JPY in 2022, the prospect of a decisive retracement is strong. Already we see the big uptrend has been broken, before latterly forming a decisive new downtrend. Momentum is strongly negative and the old breakout support of 139.40 has given way. We track the moving averages (21 & 55 days) which are often a consistent gauge for the near to medium-term outlook. Both a moving lower now. This all suggests that rallies are a chance to sell. A retreat towards the next support band 130.40/131.35 could easily be seen (especially if US bond yields continue to track decisively lower). 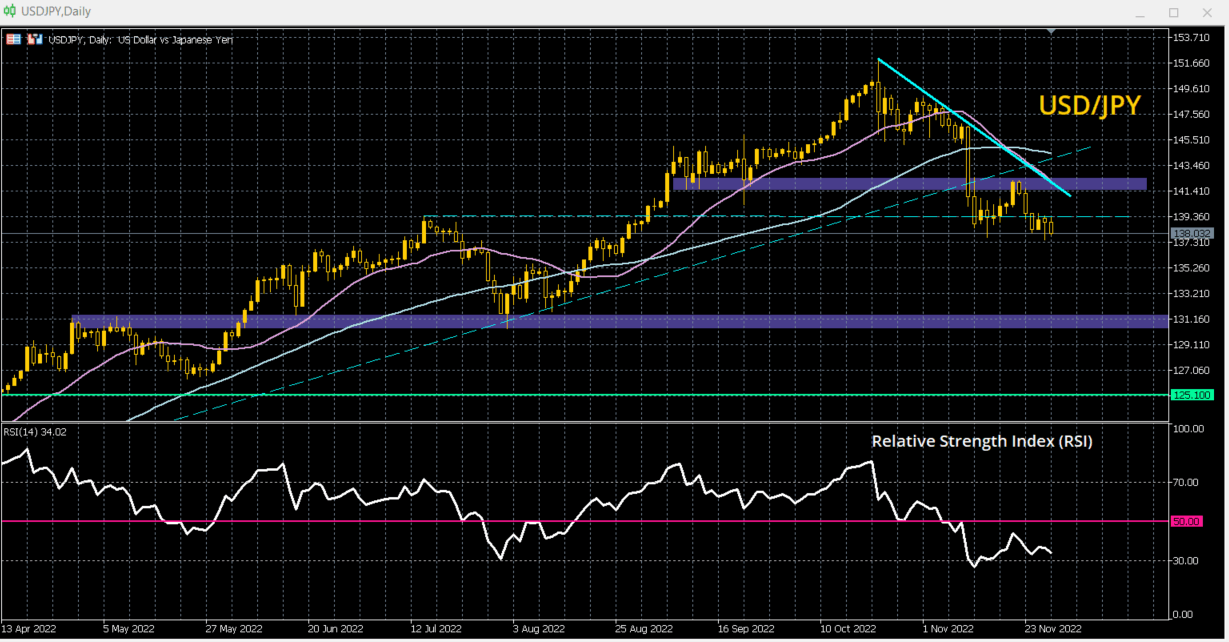 Richard is a seasoned market analyst at INFINOX, focusing on trading education, research and analysis across global financial markets.As a trading expert, he provides a vast breadth of market intelligence through daily and weekly reports, w...

Hanging Man
The Hanging Man candle is a bearish trend reversal signal. It is a candlestick pattern that needs a subsequent confirmation move lower to have conviction.
FIND OUT MORE

Espresso Morning Call: USD selling eases after GDP surprise
The drift of selling pressure on the USD has begun to unwind after the upside surprise in US growth. This is weighing on risk appetite for major markets.
FIND OUT MORE

Espresso Morning Call: USD falters again with a dovish BoC
With the Bank of Canada on pause, speculation leads to whether the Fed is set to follow. This is once more weighing on the USD, helping to support risk assets.
FIND OUT MORE
IX INTEL - DISCOVER MORE

Curated especially for new traders. Our educational suite is an essential toolkit to getting started with your trading journey.

Stay abreast with the newest developments at INFINOX. Discover all our latest news and announcements.